SO / Sotogrande is the tenth and most recent addition to the SO / Accor hotel brand, with the opening of fifteen more. Located in an exclusive gated community in Sotogrande, this is a luxury brand but with a distinctly rebellious touch – each SO / hotel has its own identity and style, while recognizing its roots. In the case of SO / Sotogrande, it occupies the site of an old cortijo – a traditional Spanish farmhouse – and draws on its Andalusian heritage in a revolutionary way. 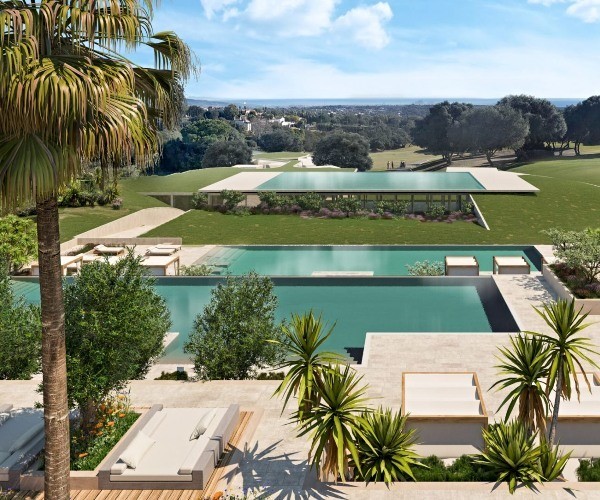 Accor even hired a designer – as is the case with every SO / hotel – to represent the resort in this regard. In the case of SO / Sotogrande, it was women’s swimwear designer Dolores Cortés who was tasked with designing a vibrant uniform for the staff. Accor wanted something new and innovative that would surprise the customer… and Dolores kept its promises. 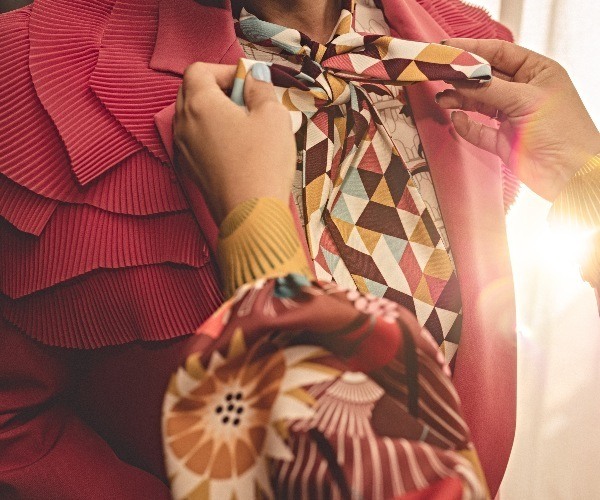 We had the great pleasure of meeting Dolores and hearing the story of her involvement – how she had initially politely declined the invitation from Accor, but how in the end she was behind not only the uniform, but also the works of art of the hotel, including the emblem of the hotel which represents three emblematic elements of Andalusian culture: a carnation, a fan and an arch. She also wanted to express Andalusia’s joie de vivre and the resort’s personality. 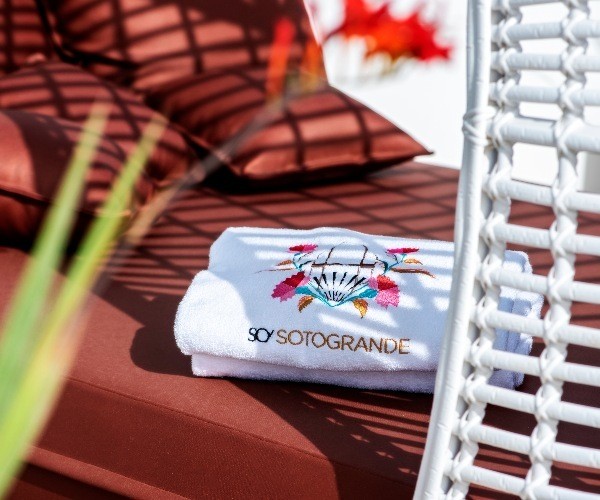 A private, air-conditioned transfer from Malaga airport to the hotel – a journey of around 1 hour 10 minutes – made my arrival very comfortable and smooth. (Plane to Gibraltar is another option, with a transfer taking about half the time.) Upon arriving at the hotel, I was greeted with a refreshing drink and a towel at the front desk while the paperwork was done. were quickly sorted and I was shown to my room in a buggy. 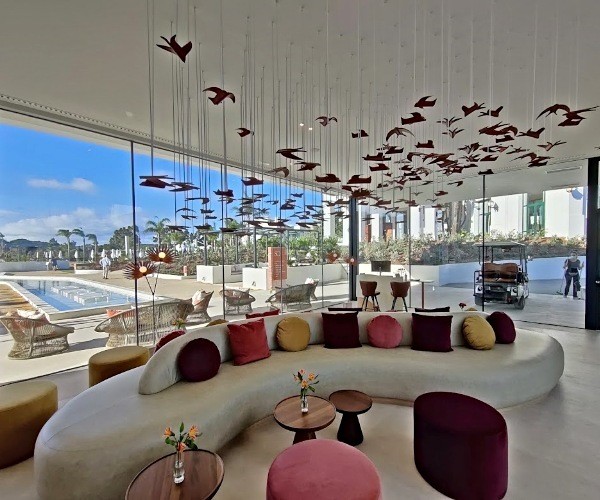 A personalized welcome from the general manager, a bottle of sparkling wine, fresh fruit and a dessert with the inscription “SO / Bienvenue” in chocolate were among the many treats that greeted me in the room. 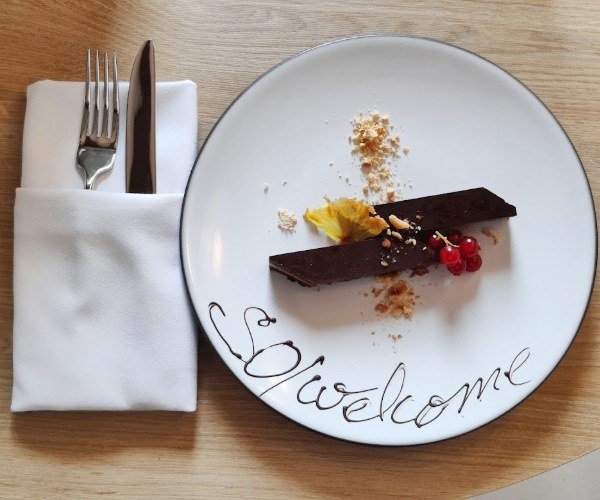 I stayed in a SO / COMFY King Room which, living up to its name, was exceptionally comfortable and well appointed, plus it had its own little balcony. 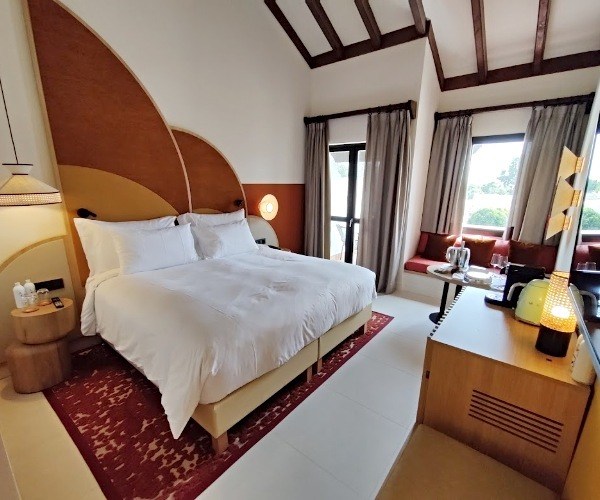 Exposed beams, Moroccan-inspired tiling, detailed fretwork and wide arches combine to give an Andalusian atmosphere to the 152 contemporary rooms of the hotel, including 36 suites.

A luxurious Noken Porcelanosa patio bathroom has other surprises in store, providing an excellent experience of comfort and relaxation. Fluffy bathrobes and a fabulous rainfall shower are just a few of the amenities on offer. 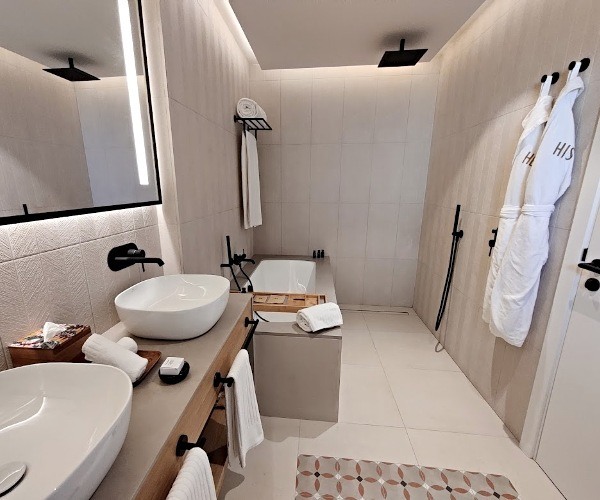 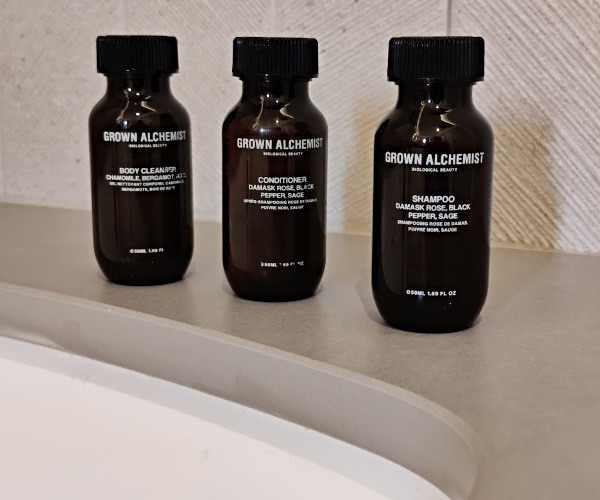 The hotel is equipped with no less than six restaurants and bars. HI-SO offers a chiringuito-style environment close to the swimming pool, while the MIXO VVIP lounge is a great place for celebrations. 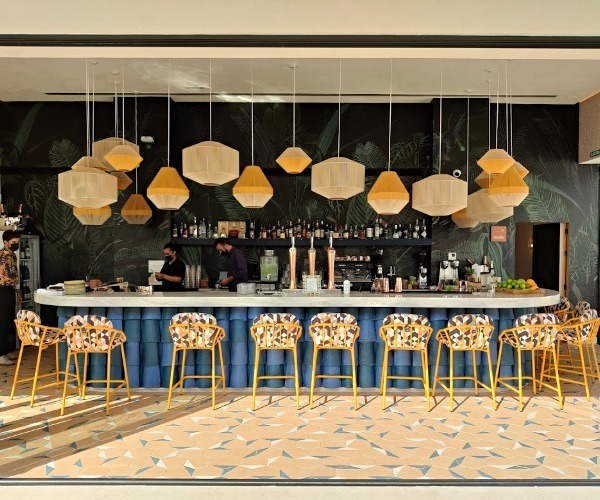 The hotel’s Cortijo restaurant is the perfect place for Mediterranean cuisine with the possibility of dining outside on the terrace, while the new Society restaurant, which is scheduled to open next year, is a gastronomic option with a more theatrical gastronomic offer. 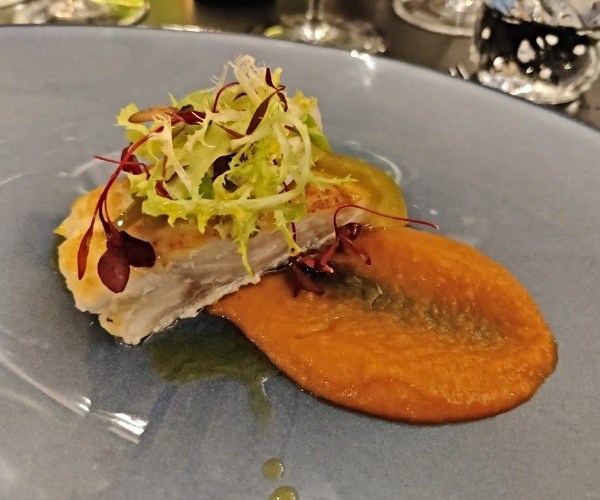 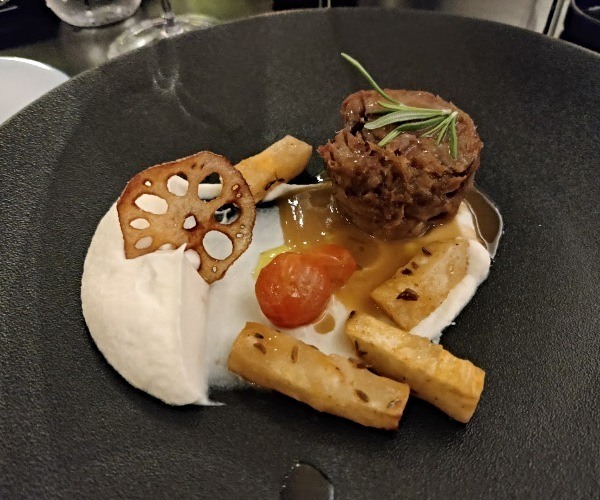 At the center of the resort are two outdoor swimming pools, among the terraces and outdoor gardens, with plenty of lounge chairs to choose from, and even oversized floating starfish to give an extra pop of color. 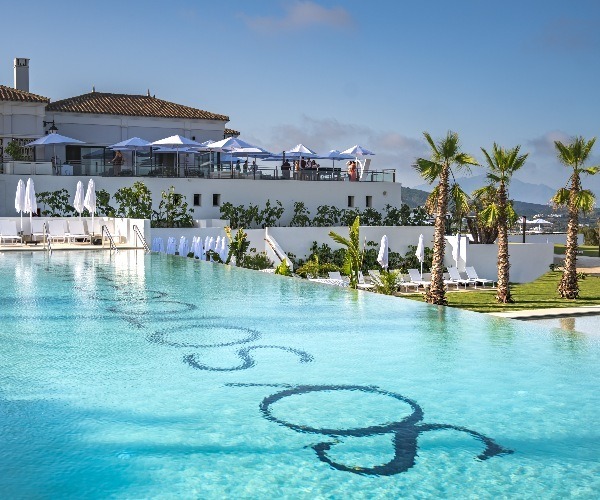 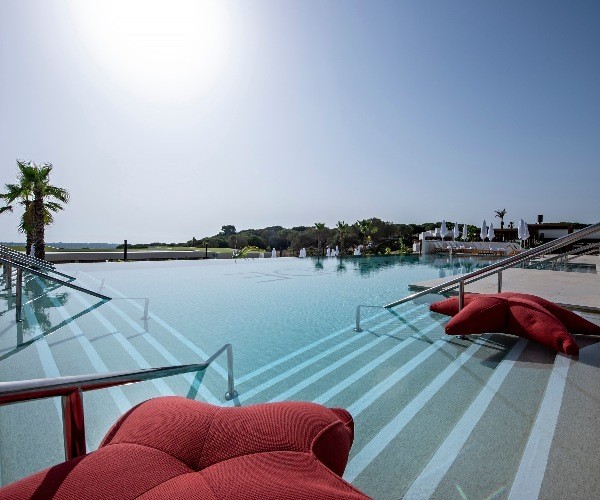 The SO / Spa Health and Wellness Club is a tranquil and relaxing space with a heated indoor swimming pool as well as thermal and hydroelectric pools. The eight treatment rooms offer everything from exclusive massages to body treatments, using products from QMS Medicosmetics, ESPA and Charme d’Orient. 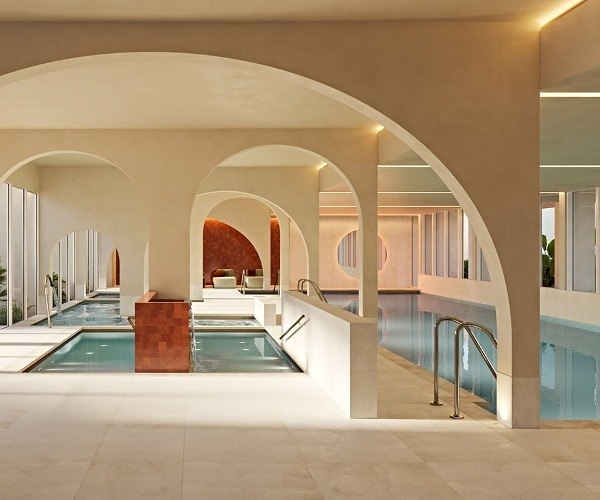 Less common treatments include cryotherapy and a flotation experiment. Not having done this before, I tried the latter – it’s supposed to put you in a meditative state and clearly worked as I managed to fall asleep within 25 minutes of being inside! I came out of it rejuvenated, I must say. 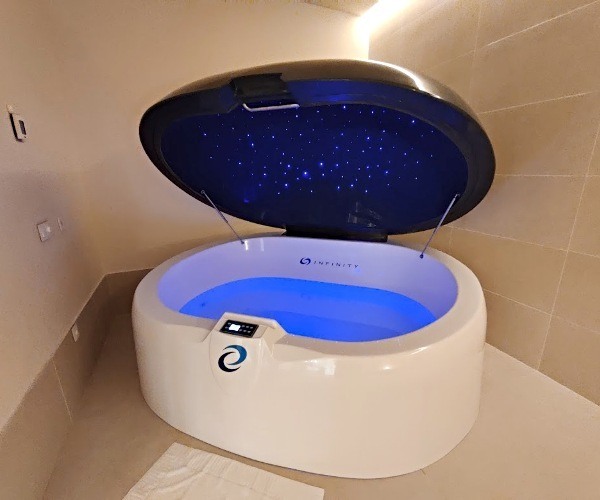 The 27-hole Almenara golf course is also on-site at the hotel. Designed by local architect Dave Thomas, its undulating fairways and deep bunkers will challenge even the most skillful golfers. 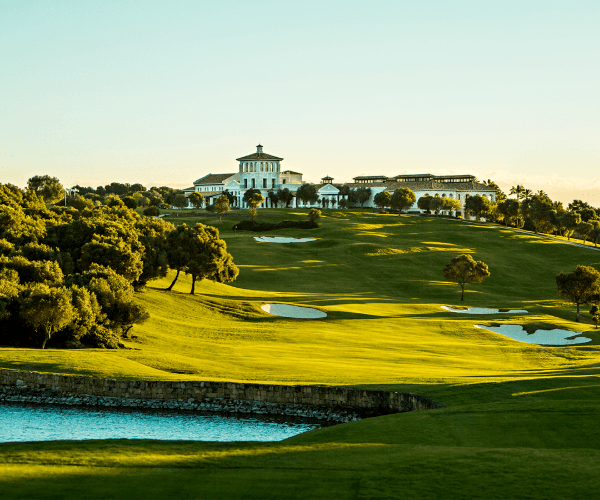 SO / Sotogrande is located in a private gated community, offering excellent privacy and security, on the Costa del Sol. It is close to Gibraltar (30 minutes), Marbella (45 minutes) and also accessible from Malaga airport (just over an hour).

The little extra touches were many during my short stay, from a bottle of sparkling wine and the SO / Welcome dessert on arrival, to that chocolate coated fig with hazelnut filling that was waiting for me in the room. 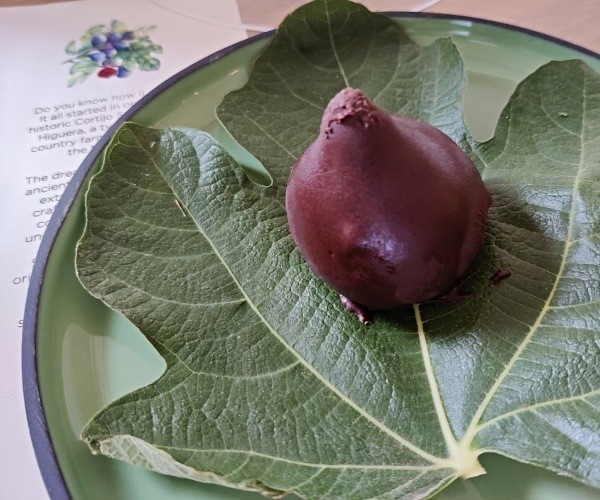 The assorted GauGin gins were another surprise delivery that arrived in the room. 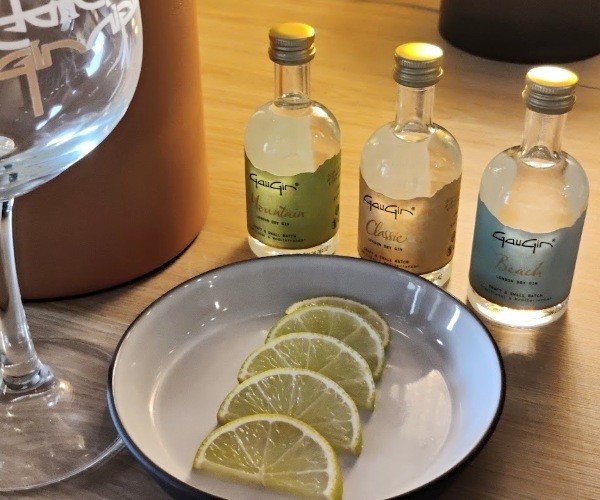 The feeling of space and tranquility. Although we stayed at a relatively low occupancy period, we didn’t think it would be too busy, even if it was running near full capacity, as there is plenty of outdoor space to enjoy, not to mention several. bars, restaurants and other facilities.

The SO / Sotogrande is a great place for guests looking for unconventional luxury, but the best of Andalusian style. The hotel is also an ideal place to stay for anyone planning to invest in real estate in Sotogrande. To learn more about the destination, see my other article here. 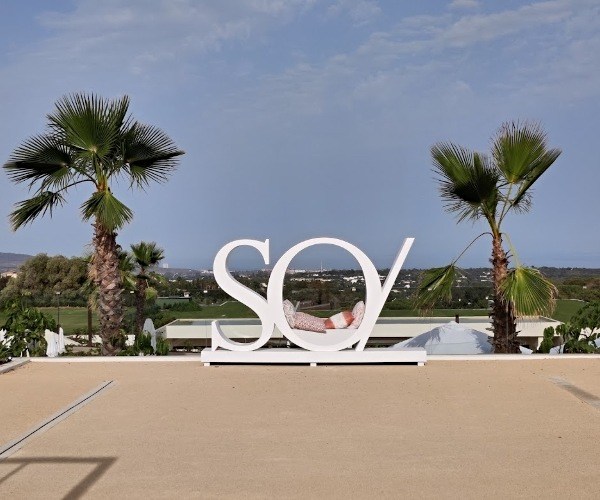 Disclosure: Our stay was sponsored by Sotogrande.